AMD KAVERI: An evolution in progress 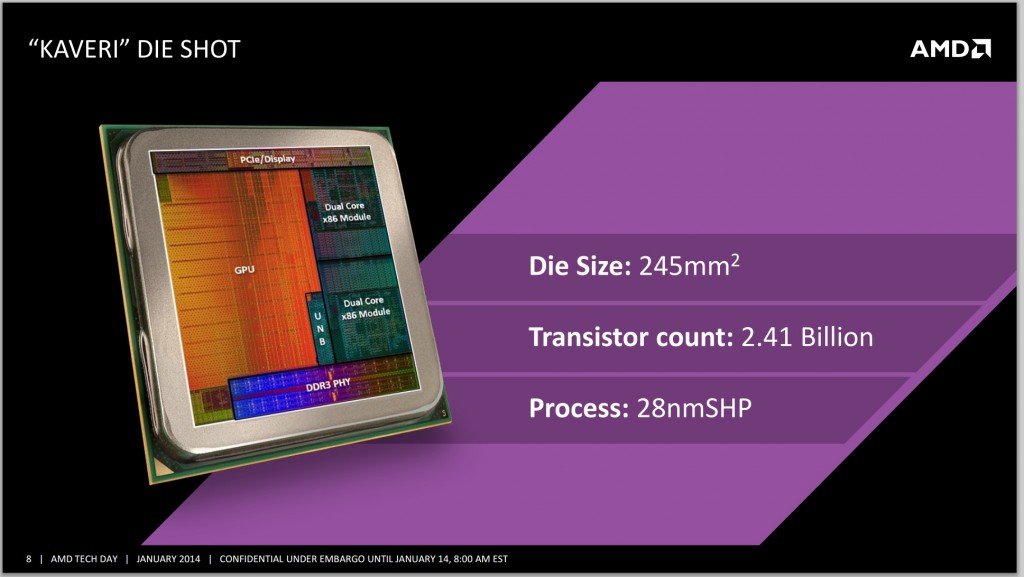 Not to bore you with geek details but AMD’s focus was to design dual core building blocks that would optimize the resources within the processor. Functions with high utilization (such things as Integer pipelines, Level 1 data caches) are dedicated in each core. The other units are now shared between two cores and include: Fetch, Decode, Floating point pipelines, and the Level 2 cache. This design allows two Cores to each use a larger, higher-performance function unit (ex: floating point unit) as they need it with less total die area. On paper, Bulldozer looked promising but upon release, it was lackluster to say the least.

AMD first released was their APU (Accelerated Processing Unit). For those who are not familiar with the term APU, AMD was the first to engineer a computer processor with the graphics built onto the actual die (Thus called an APU). Zacate was the original release with a low power budget APU (2 Bobcat cores) that was actually soldered to the board in a Min-ITX form factor. Next, came the long awaited Llano APU’s (4 cores) which featured AMD’s new “Bulldozer” cores. Both used x86 architecture and both were low priced APU’s with Zacate being the budget of the two. This was the start of a new direction for AMD.

The evolution continued with Trinity and Richland. AMD worked within the micro-architecture and “fixed” the Bulldozer issues with new instruction sets, branch prediction, que and prefetch just to name a few details. The result was better CPU performance and better efficiency.

Well, with these details covered, let’s get AMD’s newest release, the A10-7700K Kaveri to the lab and see how it shakes out compared to AMD’s past generation APU.