AMD’s acquisition of ATI paid off this year when the company went in the black for the first time in years due exclusively supplying to all the major console makers. Another clear benefit from snagging the ATI team was it gave AMD an upper hand when it came to embedded graphics in their processors and while the performance is still no-where near most discreet graphics cards the upcoming processors codenamed “Kaveri” are closing the gap. 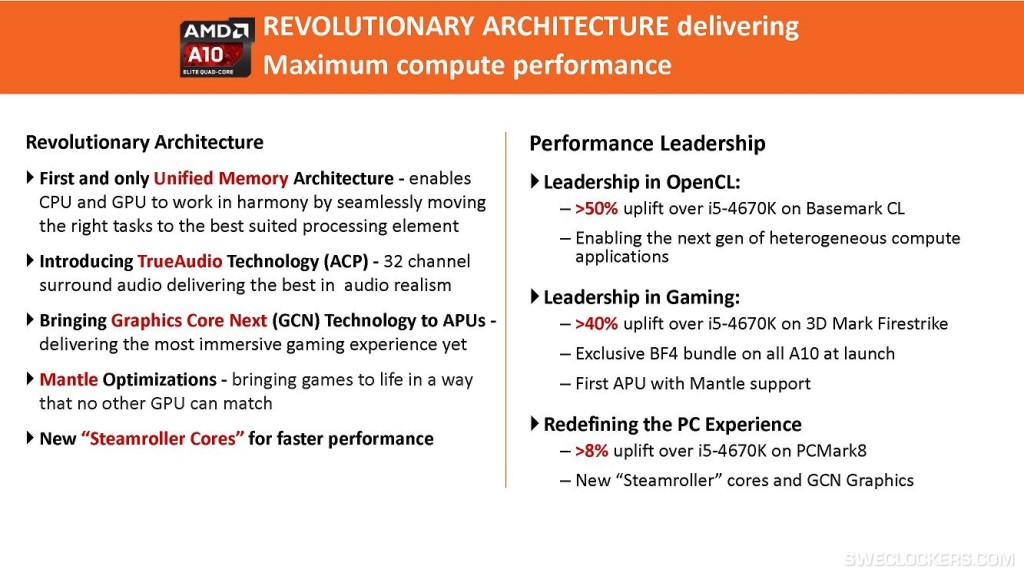 According to slide that appears to be released by AMD (but is not confirmed) show the gaming performance of the new chips as 40% faster than the Intel Core i5 4670k in 3DMark Firestorm and 50% faster in OpenCL applications. At this level of performance it isn’t unreasonable to assume we could see the chip easily rending games at 30FPS, as long as the settings are not maxed out. In addition, it appears as if AMD will bundle Battlefield 4 with the new processors, which retail for under $200 – making it an exceptional value for gamers on a budget.

As you can see from the table below the flagship “Kaveri” processor will come with a quad-core “Steamroller” design that has a Turbo Clock frequency of 4GHz and feature 4MB L2 cache. On the graphics front it will include a total of 512 Graphics Core Next processing units and have a GPU engine of 720MHz.