Intel has not released an enthusiast processor for the last two years (Ivy Bridge-E), but in the meantime they have launched not one, but two new mainstream architectures. Ivy Bridge-E changes this, but as a drop in upgrade for the x79 platform, there are no major changes besides a die shrink and better power consumption. Of course this Isn’t what most enthusiasts wanted, but at the end of the day we have to look at Intel’s market strategy, which over the last few years has focused more on low power consumption than all out performance. So, the fact we are even seeing a new enthusiast product is good, but from the looks of things it won’t be until Haswell-E until we see some real changes. 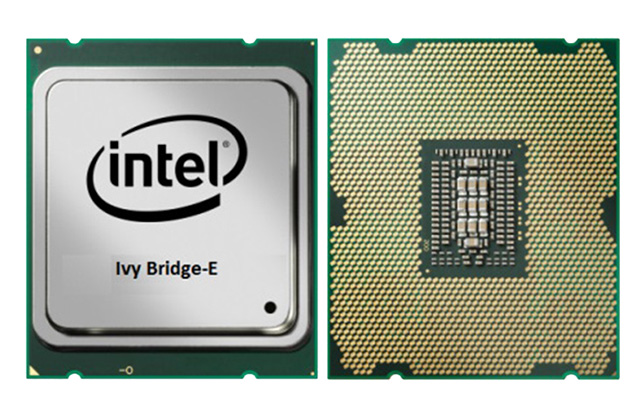 Like its predecessor Ivy Bridge-E is a 6-core/12-threaded processor with 15MB L3 cache and quad channel memory support that resides in a 130W power envelope. The Ivy Bridge-E die though, does not have 8 cores with 2 disabled, as was the case with Sandy Bridge-E, as there are only 6 native cores in the die.

One of the big advantages of the Ivy Bridge-E processor over the mainstream counterpart is the 40 PCIe 3.0 lanes. When it comes down to it, nothing has really changed on the PCIe lane front, except for the fact that the 3960X missed its PCIe x16 3.0 validation window at the time of launch, but it did unofficially support the specification. Ivy Bridge-E is fully PCIe x16 3.0 certified though, so there is no need to worry about your graphics card running at their highest performance level.

All of the IVB-E parts ship fully unlocked, and are generally capable of reaching the same turbo frequencies as their predecessors. None of the Ivy Bridge-E processor included a cooling solution tough, so you will have to buy your own. Intel does offer a closed loop water cooler that is sold separately; the TS13X, which supports both Ivy Bridge-E and Sandy Bridge-E processors.

In this review we are looking at the Intel 4960X, which has a base clock frequency of 3.50GHz and a max Turbo frequency of 4.0GHz. These clock speeds are higher than the 3960X it is replacing, which is going to add a slight boost in performance on top of the architectural improvements. The 4960X also features 6 physical cores and 12 thread execution, and the chip has a massive 15MB shared L3 cache.

Before we move onto the benchmarks we wanted to let you in on our test system and overclocking results. The motherboard we are using is the ASUS RAMPAGE IV FORMULA with the latest BIOS to support Ivy Bridge-E processors, 16GB Corsair memory at 1600MHz with timings of 9-9-9-24. All the benchmarks are also performed in Windows 7 Pro, because let’s face it, who cares about Windows 8.

When it came to overclocking we got similar results to our Sandy Bridge-E testing. Our final stable clock speed for all 6 cores was 4525MHz, which is an increase of 525MHz from the Boost clock frequency. To get the processor running stability at this speed required 1.4V, but even at this voltage level our water cooler kept the 4960X running at a safe operating temperature of under 70°C. Of course running the voltage this high can case CPU degradation over time, so you might not want to run the chip at these settings 24/7.