Rosewill is a brand that you may have heard of, but may never have purchased. The company has traditionally produced value focused gear, but has been making impressive inroads into premium high-end gear without the bloated price tags of other famous manufacturers. Mechanical keyboards with genuine Cherry switches can easily run about $200 when you factor in individual LED lit keys. The Rosewill Apollo RK-9100x Series runs about $149 on Amazon and is an excellent choice for those who have always been curious about mechanical keyboards, but have been reluctant to plunk down $200 to do so. This unit utilizes the Cherry MX Brown switch with individually LED lit keys under the RK-9100xBBR model number. 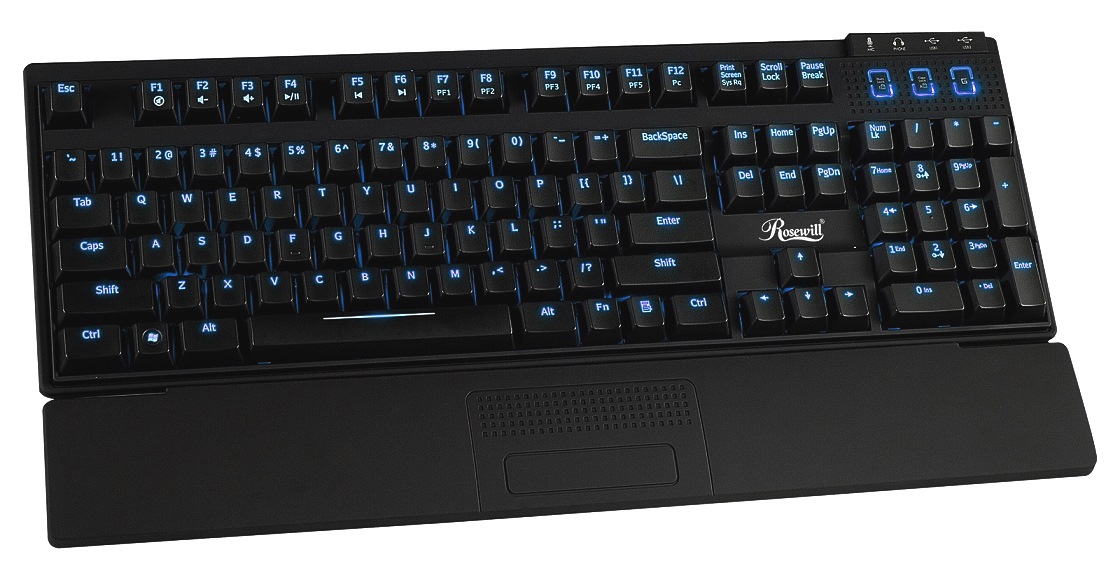 Unboxing the keyboard I got the immediate impression of quality. The keyboard is held securely by two large black foam bars and by cardboard buffers along the long edge of the keyboard. Unboxing the keyboard we find a key cap puller, a set of WASD keys and directional keys in bright orange, a manual, a CD containing the software to program macros, a wrist rest, and the keyboard itself. The cable is very nicely braded and holds neatly the USB cable, a microphone cable and a headphone cable. All of the connectors are gold plated.

Picking up the keyboard I was immediately stunned by the solid heft of the keyboard. Specifications show the keyboard itself weighing in at a hefty 4.3 pounds. I did not tear open the case of the keyboard, but it feels like below the red PCB is a metal plate to ensure the PCS does not get bend or cracked perhaps during travel or if dropped. I am certain the individual mechanical switches comprise most of the weight as most mechanical keyboards are about this heavy. The PCB that hold each of the individual switches and LED lights is red and is visible under very bright light near the number lock, caps lock and gaming mode indicator lights in the upper right corner of the keyboard.

Ports for USB, microphone and headphones are easily accessed from the top right corner.

The board has a standard layout of keys and has function keys for audio controls, pause and skip for Windows Media player, and gaming profile modes. Using the Fn key and the 8 and 2 keys on the 10-key pad allows switching between different LED lighting modes. Below the orange WASD keys are shown with bonus points for those who can tell what is askew with how I set up the picture.

The top of the keyboard is professional looking and clean of any gaudy emblems.

The underside of the keyboard has the model number and power ratings, two pop up legs with very nice soft and tactile rubber feet, two ridged rubber feat near the front of each corner and two notches used to attach the optional wrist rest.

Below is a shot of the rubber feet on the back extendable legs. This feature is very much appreciated as most keyboards only utilize plain plastic feet on the rear legs which result in the keyboard constantly slipping under frantic gaming sessions.

Flipping the keyboard back over I used the key cap remover to easily slide the cap covers off of the WASD keys to try out the orange set. This view shows the Cherry brand brown switches and the individual LED lights wired into each key. The keys are surprisingly easy to remove and replace. There was no risk of breaking the key or switch when popping them on or off.

The most important feature of this keyboard is the type of mechanical switch. This model sports the Cherry MX Brown switch. The brown variety is the most popular of the tactile, but non-clicking switches. This switch was introduced in 1994 as an ‘ergo soft’ switch, but has become one of the most popular Cherry switches. The brown feel and feedback provides a good middle-of-the-road option perfect for both typing and gaming. Also, the keys lack the loud clicking feedback that makes the use of a Brown switch in quiet environments, like offices appropriate.

This keyboard just feels right. Let us start with the construction. The unit is solid and all surfaces facing up, except for the key caps of course are coated in rubber. At first I was hesitant because I was certain that debris would become immediately visible on the surface. Surprisingly the board stays pretty clean and also ends up spotless after using a soft keyboard/screen brush. The wrist rest is also coated with rubber. When resting the left palm on the rest I enjoy the soft and tactile comfort provided by the surface. That being said, the right palm rests on a pattern embossed into the plastic that makes it look like a laptop mouse button and track pad. This feature is just for looks, and that would be fine except for the fact that it is placed directly under the right palm. After typing continuously I get small little impressions in my palm from this pattern. The impressions don’t hurt or really bother me, but knowing that it is a cosmetic feature that has no discernible function leaves me wondering why they would have added these bumps and ridges.

I am one of the vast majority of people that swore by gaming keyboards made by popular companies adorned with snazzy features like LCD screens that, in retrospect, I really did not need. I thought I needed a fancy LCD screen to read my CoreTemps and dedicated multi-media keys to control my omnipresent music, but after using the RK-9100xBBR, I am very happy to say that I do not miss those superfluous features one bit. I have no complaints at all about using the function and F1 key to mute, but I should say that the play/pause and forward/back controls for music seem to only work for Windows Media Player.

I’ve used membrane keyboards exclusively for so long both at home and at work that I had no clue what I was missing. A high quality mechanical keyboard with genuine Cherry switches will be one of the best purchases you will ever make. You have no idea just how unhappy you are hammering away on muddy silicone membranes and how typing on the perfect entry mechanical switch, the brown variety, will please you immensely. Even those who have no interest in overclocking or PC games will love the feel of this keyboard. As I push very slowly down on the key, I feel a slight notch that lets me know that I have actuated the switch and the input has been received by the computer. This type of tactile feedback is distinctly noticeable when pushing a key down slowly, but provides an almost subliminal feedback when typing quickly. It should be noted that all Cherry mechanical switches will bottom out and produce a noticeable clunk. This means that when the key is pressed and the trigger is actuated, the key can be pressed further so that the key cap actually bottoms out on the top of the switch. This type of bottoming out is intended, but does produce an audible noise. Many users will add individual O-rings to each key cap to muddle the sound of the keys bottoming out. Bags containing a couple hundred O-rings for this purpose can be bought online for about $9.

The feel of the key caps and the visibility of the indicators under low light is excellent whether using the minimal brightness or the maximum setting. I do like a pulsating mode for my gaming pc, although when the cycle goes dim it actually turns off all LEDs for about a second. I have found myself gaming and switching from a set of keys to another looking down to dark keys and having to wait a second for the pulse to brighten them back up. The pulsation mode really does look cool and has a very slow cycle time compared to most mice and keyboards I have seen with this feature. It takes about 7 seconds for the LEDs to go from black to their brightest under pulsation mode.

I appreciate that Rosewill supplied bright orange WASD and directional keys, and they do glow pretty nicely at night under the dedicated LEDs. There are only two caveats with these orange keys. First, they are noticeably shorter than the rest of the keys on the board by about a 1-2 mm. That may not sound like much, but when the orange WASD keys are installed and I roll my fingers over the tops of the keys I notice a marked drop in the level of these keys. Now that being said I have not noticed any problems with typing comfort, speed or accuracy with the orange WASD keys installed. The second caveat is that these orange replacement keys are constructed with a slightly rough matte surface. The rest of the keys are nice and smooth, and the WASD and directional orange keys are rough. This could be as intended to allow you to find the WASD keys without looking, but as the F and J keys have the standard homing ridges, I don’t see anyone not finding the ASD keys with their left three fingers. I can see the rough texture being of use when trying to feel for the location of the W key as it is on the next row up.

The macro software provided on the CD is basic. There are no instructions on how to enter macros on the printed manual, but there is an instruction to have you install the software. Once the software is installed a red icon with a “G” will run on your task bar. Click the “G” and the macro creation software will launch. From that point click “Operation Explain” and the software will launch a locally stored step-by-step guide to create macros. I tried it out and if I were to use macros in my games, I would definitely utilize it. A nice perk is that there are shortcuts built in for many common productivity tasks like cut and paste.

The Rosewill Apollo RK-9100xBBR gives you all the benefits of much more expensive Cherry mechanical keyboards, but without the sticker shock. If you don’t need dedicated media controls, there is no reason to pay a premium price for an expensive brand that is using the exact same Cherry mechanical switch. The quality of the unit is outstanding, the feel of the switches is pleasing, the LED lights are bright and nicely customizable, and the included software to create macros is a nice addition.