Over the last few years SSDs have started to replace standard mechanical hard drives in the consumer market, as the speed relative to an HDD makes them logical choice hands down. However, SSDs haven’t been as widely adapted in the enterprise space because of one major issue that has plagued the drives since their initial launch – flash wear. An SSD has a limited number or write cycles that can be performed on a NAND memory block and once you’ve used up your quota for that block the disk can become unreliable. In the consumer market this isn’t a major issue because current gen drives comes with wear leveling algorithms that can prevent a bad block from being written to, but in a scenario such as database use, multiple blocks can quickly become unreliable due to the sheer amount of writes being performed making an entire drive useless.

Seagate is well aware of the write endurance issue and their latest 600 Pro drives come with features that dramatically improve the durability of the NAND in enterprise environments in comparison to consumer SSDs. 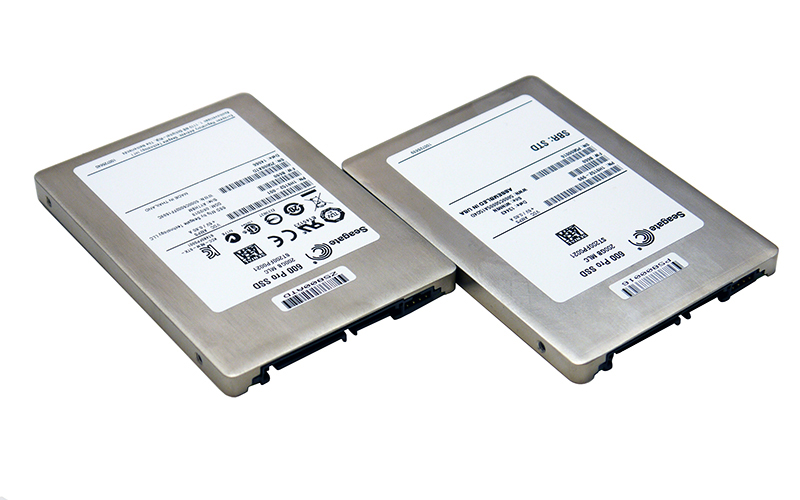 What makes these drives tick is high-performance LM87800 SATA 6G SSD controller. This controller was co-developed by Seagate and it comes with extensive hardware acceleration, dedicated host-side and NAND-side ARM micro-controllers and a 6Gb/s SATA host interface, enabling it to deliver performance of 90K sustained random read/write IOPS and 550 MB/s sustained sequential read/write throughput. The controller is also designed for low power leakage via advanced power management features that reduce the overall power consumption of the drive via reducing the power load based on the I/O levels. So, when the drive is less active the power consumption is minimized.

With low power leakage and the LM87800 controller the 600 Pro SSD series has a write lifespan of around 5,000 P/E write cycles. In heavy write environments that isn’t going to cut it, but Seagate markets this drive somewhere between the enterprise and consumer markets to be used in hyperscale data centers which are often associated with cloud computing storage centers. These types of data centers are more read heavy, so the amount of writes will not be an issue. To further improve the durability a large percentage of the NAND memory (27% over provisioning) is also set aside for drive maintenance that reduces write amplification and the drive comes with an extended 5 year warranty.

As a drive that falls between the consumer and enterprise markets the Seagate 600 Pro SSDs are more expensive than your standard run-of-the-mill 6G drives. The 200GB model we are looking at today comes with an MSRP of $331 making the cost-per-gigabyte $1.65.